The General and the Eel Shrine 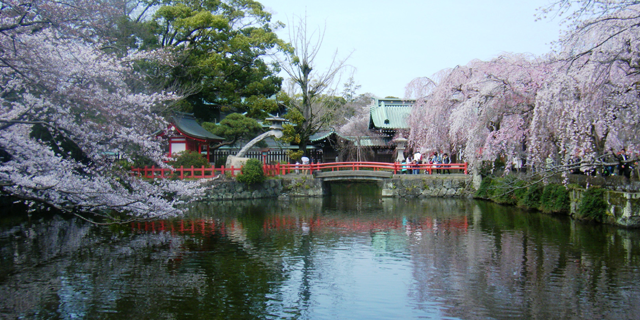 In ancient times, Japanese people thought of Mt. Fuji as a woman, a beautiful goddess called Kohana-no-Sakuyabime. And, the father of that goddess is enshrined in Mishima Taisha Shrine. Yet, this is not the only reason the shrine became Japan’s most important place of worship. Nearby the shrine lived Minamoto-no-Yoritomo, a key person in ancient Japan who had been banished to the Izu peninsula, who, as legend has it, did the 18-kilometer return trip to and from the shrine every day for 100 days to pray for victory in the rebellion he undertook. His rebellion was successful. And he became the first samurai general, or shogun, of Japan, forming the first real military government in the country. In the rapture of achieving this feat, Yoritomo awarded territory to the shrine and made the day commemorating the rebellion a shrine festival; thus, shogun after shogun who from time to time controlled Japan to the end of the Edo period always treated the shrine with full respect. In this way, Mishima Taisha Shrine represented the guardian deity who legitimized shogunate governments that followed in the footsteps of Yoritomo. Yet, it was not just the guardianship of the deity, people of yore believed the eels of the shrine pond also offered protection, as divine messengers. Nevertheless, eels are delicious to eat. And Japanese people love to catch, grill and eat them. Yet, the eels in Mishima Taisha pond were left untouched for fear of invoking punishment from the shrine deity. However, in 1619, supposedly, a friend of the second Tokugawa shogun, Hidetada, bragged that the deity would not punish a friend of the shogun for eating the shrine eels, which he then did. This caused a problem for Hidetada, which he purportedly solved by saying: “It is sad to give a human life in exchange for the life of a fish (eel), but the law is the law,” with which the eel eater was executed (from the manuscript Meiryofutabagusa). With that, eel catching ceased, the eels of Mishima Taisha Shrine became like pets, that, up to the end of the Edo period, it is said, could be summoned with a few claps of the hand (from scroll 5 of Tokaido Meishozu). Yet, in 1868, with the Meiji restoration, civil war broke out, ending the shogunate, and the army of the new government is said to have heartlessly eaten the eels protected by the deposed shogun. And, now, eel cuisine is famed in Mishima. Nevertheless, why not come to the shrine pond and clap, to see whether or not eels and people can still take pleasure in each other’s company.

■Isoda Michifumi Profile
Born in 1970. Showed an interest in ancient documents from a young age due to the family connection to the Kamogata Domain. Completed a doctoral course in the postgraduate school of Keio University in 2002. After serving as a professor at Shizuoka University of Art and Culture, is now an associate professor at the International Research Center for Japanese Studies (in Kyoto). Won the Shincho Document Prize in 2003 for bestselling novel Bushi no kakeibo: Kaga han gosanyōmono no bakumatsu ishin (A samurai's account book: The accounting officer of the Kaga Domain on the eve of the Meiji Restoration). Has also written many other books, such as Tokugawa ga tsukutta senshinkoku nihon (how Tokugawa created the advanced nation of Japan). Currently lives in Kyoto and is a father of two.